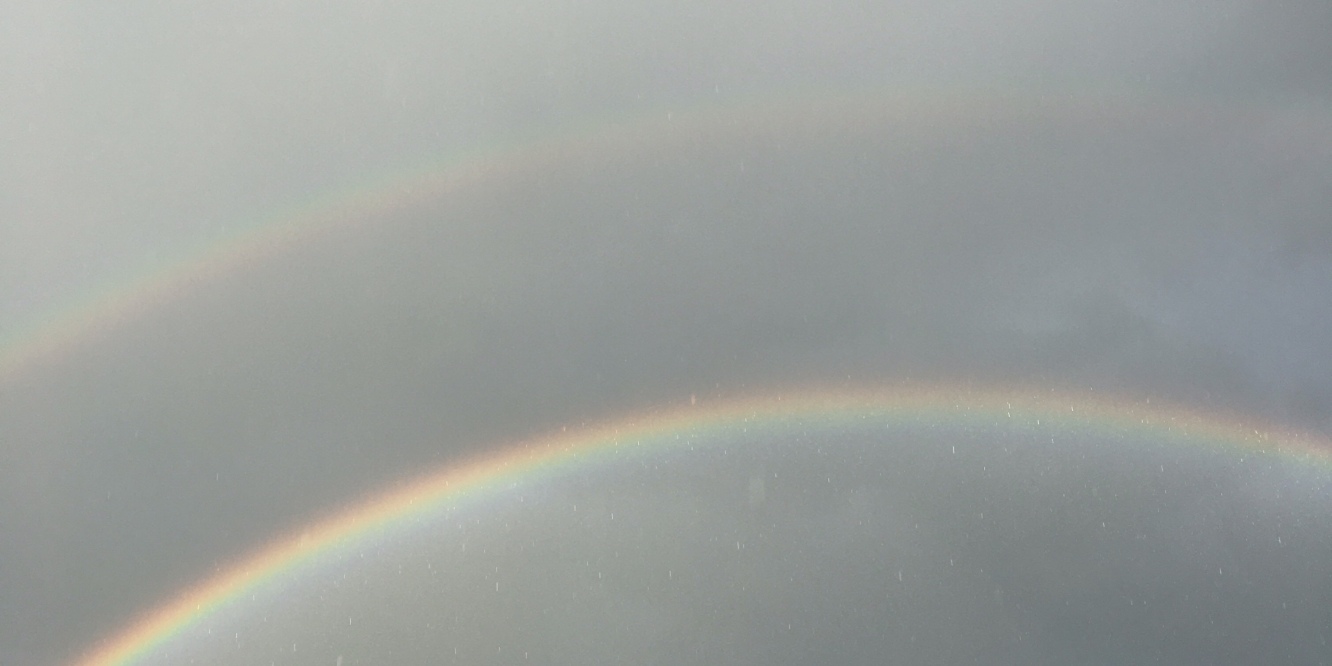 The turn signal taps in concert with the muffled drops of rain while I wait for a steady stream of cars to pass. It’s afternoon, en-route to pick up my son. Between my husband and I we see this intersection at least 10 times a week on the way to Rowan’s pre-school at the university campus up the road. The best route to avoid the most traffic from our house is to follow Shady Ave. to the synagogue at the corner with the Hebrew letters and the sprawling tree stretching against the grey stone.

The light changes and I finally turn, the car stops in front of me almost immediately to turn up the road to my alma mater, the once women’s college. I’ve walked this road too, before I had a car, on the way to catch the bus to my boyfriend’s dorm.

This grey afternoon I’m wondering if it would be too rainy to go to the park. Sun hiding in a watery shadow behind clouds. They’ve been calling for rain all this weekend, and it’s the last chance we’ll have to go to the pumpkin farm. It’s been really cold. I need a new coat. I forgot to call back that guy at work.

Mundane empty thoughts swish past as the Synagogue is barely visible in my left-side mirror.

It disappears, a last glance in the distance when I check my mirror before I turn.

It’s the last time I thought about this landmark on our well-traveled route until this morning. When I clapped my hands over my mouth as if to hold in the flash of pain and anger and fear. People Dead, Active Shooter at Tree of Life Synagogue.

The room spins. Adrenaline rushes. My hands are shaking. I call out to my husband.

“The synagogue shooting? I just saw.”

We don’t talk for awhile. Or at least, I don’t remember what we say. I tell my child to eat his lunch. I don’t know what to do. I google, I find the local news stream. I check the facebook pages of people I know who attend there. I forget to turn on the television and instead obsessively refresh feeds. I don’t feel better.

The Bat Mitzvah I attended once starts to come back in flashes of deep hums of Hebrew and shimmering stained glass windows. How terrified they must have been, the last thing they would see might have been those flashes of colored light. My mind leaps to my Jewish friends in the city and elsewhere. It wanders to the community I grew up next to, those I went to high school with. I don’t know where all of them worship. Pittsburgh prides itself on the “small-town” feel in a city. It’s likely I know someone who has been killed or injured. Swallowing becomes nearly impossible, and I feel a sharp stab in my gut. That’s where I feel my feelings first. My stomach flutters and cramps and sighs and aches my feelings.

We aren’t Jewish, but scattered family and friends check in anyway. I read the words of people in my city that are angry and sad and mourning, that are bold and inspiring. That insist handling this one way or another is the answer, the solution. I try to be the zen of Mr. Rogers and look for the helpers but they are in the emergency room too. And still. 8 people they say now. I scream into the void when I hear the president’s response: Guns and God. I shiver though I am not cold.

Then we do the things we planned to do this afternoon. With this heavy weight of present terrorism hanging over us. I think we do it because we do not know what else to do. I talk to my son who does not understand, not really. Does not have the context to know. Later he runs around the dinner table in his Batman mask and cape. He takes down the bad guys with swooping fists.

It’s not that we thought we were safe here, in a city swarming with its own complications and history of racism and complex struggles with segregation and gentrification. It was only a few years ago people were killed by an active shooter at our largest mental health facility, then a local university was plagued by bomb threats for weeks. But when they say that the shooter is alive, that he is a white man, that he screamed anti-semitism as he racked a house of worship with bullet holes, I am unsurprised and rage fills the quiet space between grief and shock. I am rushed to thoughts of the black man paralyzed by police outside my apartment window at a traffic stop when he hadn’t done anything. Of the black men and women routinely murdered by the same “helpers” we are supposed to look for in these situations.

I don’t mean to make light of Mr. Rogers. He is my favorite theologian, my constant reference point, he called the neighborhood this happened in his home. Went to his house of worship just up the road. I just mean, this is more complicated than words, than calls for civility in discourse, than prayer. Today it is a raw and ragged, and raging wound in Pittsburgh’s heart, especially in the Jewish community. It is so deep and so obvious because it is so many, because it was a targeted and clear hit, because the road was closed for hours and hours, because hundreds of folks gathered at a vigil on the corner. And the wound will fester for the days and weeks and years of our living. It will scar but never quite heal. When I make that turn at synagogue from now on that pit of pain will rise again and again until it maybe starts to fade a bit. News from my city will fill the news stories for awhile, but slowly fade out in the coming weeks. And maybe will disappear until it happens again. Somewhere else.

And they’ll mention Pittsburgh and the shooting at Tree of Life or L’Simcha synagogue like they talk about Sandy Hook, and Charleston, and Pulse, and Virginia Tech, and Sutherland, and Parkland, and Aurora, and and and and and and. Each one a gasp of pain and remembrance and I’ve barely begun the list.

I don’t have good words or answers. Just a rage that’s hot and angry shards of broken glass that shift in my lungs with every breath. They cut and rub and itch while I read the news. They slip out of my eyes in tears in the shower where I can’t keep them in anymore. They come up in the fear and heartburn when I beg my husband not to leave his phone at home to charge while he goes to work at the movie theater tonight where there are large groups, an idea not unfamiliar to terrorists like this. I am afraid of more, because it was so close. So close.

Tomorrow in my well-protected mostly white congregation we’ll sit on our Sabbath in the grief of this day. We’ll be like Job calling into the darkness of humanity and begging God why. I’ll uncomfortably shift in the pew, weary of the surreality, rubbing my red eyes after not having slept well. I will fixate on the sign out front of the large church building on a prominent corner that proclaims “Love Thy Neighbor, No Exceptions” and worry that it makes us a target, I’ll think about every entrance to the building and feel those little traps of anxiety. And then will be angry that I felt that way because isn’t that what they want?

They. As if I am separate from this person. When the truth is, as one smart Facebook friend posted, this is “we”. We are harboring terrorists in our families and in our friends, and in our communities, in our decisions to remain apolitical and say nothing and insisting on civility when this is the definition of uncivil. WE are destroying and shooting and continuing this irresponsible pattern of brokenness and grief. There is no putting on our big person pants because we’ve talked and talked and talked and STILL. Still today this happens. It is messy and ugly. There are no good words no good solutions no good options to stop it from happening again tomorrow.

Even though it may seem obvious, here are some reminders I gave to myself of some things to do, I’ll continue to add more here:

PA Mid-term elections are November 6th, find your polling place Here
Donate to the Islamic Center of Pittsburgh’s fund for families and victims

Have conversations. Do not remain complacent. Read read read and learn about white and Christian privilege. Sit back in conversations led by people of color and minority communities. Challenge anti-semitism, islamophobia, racism, sexism, homophobia, transphobia, any hatred or other expressions you witness, especially from people you know.

One Reply to “It Happened Here. Again. Shooting in my Hometown.”